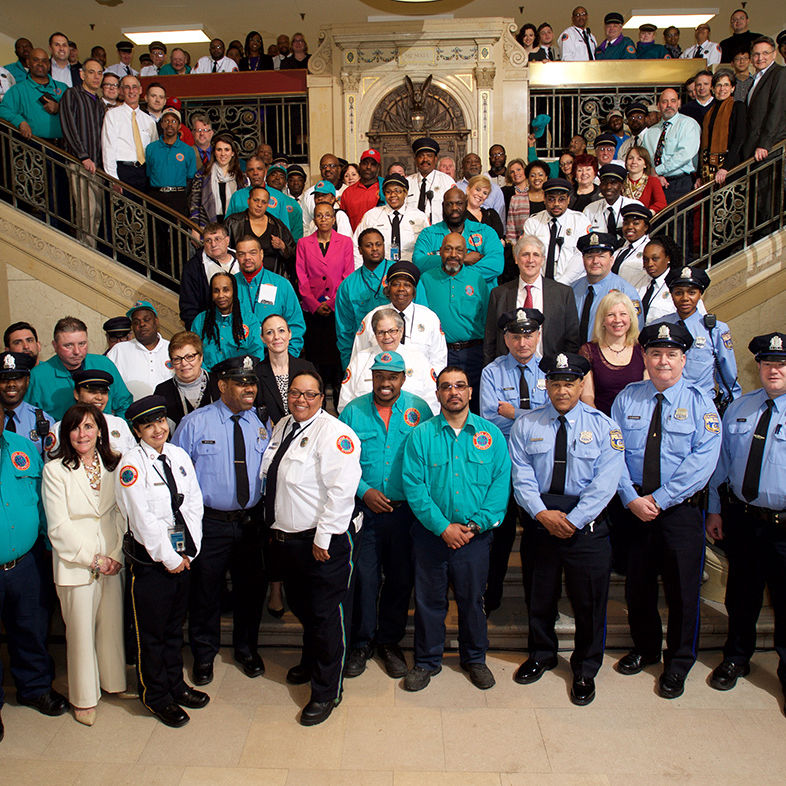 Launched in 1991, CCD and Its Many Partners Have Worked to Make Downtown Better

PHILADELPHIA (March 22, 2016) – The Center City District (CCD) today marked its 25th anniversary of providing services to make Center City clean, safe and attractive with a special thank you luncheon for all its employees and paid special tribute to 11 individuals who have worked with the CCD since its founding in March 1991. A total of 42 other cleaners, Community Service Representatives, Philadelphia Police and administrative staff were recognized for 5,10, 15 and 20 years of service.

This year is also the 60th anniversary of the Central Philadelphia Development Corporation (CPDC), which created the CCD. The awards luncheon was the first of a series of events to observe the anniversaries.

Since March 1991, CCD cleaners in their easily recognized teal uniforms have been highly visible sweeping and pressure washing sidewalks and removing graffiti. Community Service Representatives (CSRs) have become a familiar reassuring sight, working in partnership with the Philadelphia Police Department and offering greetings, information, aid, or just a friendly smile to downtown pedestrians.

Mayor Jim Kenney offered his congratulations to the CCD on its 25th anniversary. “The CCD has consistently maintained its mission for 25 years and today, downtown Philadelphia is a very different place, more attractive, more welcoming, with busy sidewalks, thriving retail, cranes dotting the skyline, and a growing population,” said Mayor Kenney.

“The CCD is extremely proud of its loyal and hard-working CSRs and cleaners who have created a downtown where residents, business owners and office workers, thousands of university students and an unprecedented number of visitors can enjoy in a clean and safe environment the walkable streets of Center City and its many and varied offerings,” said Paul R. Levy, President and CEO of the CCD.

The CCD would like to express its gratitude to the many businesses and property owners, supporters, partners, and workers who for 25 years have helped make Center City a competitive location for business and an attractive place to work, live, shop and visit.