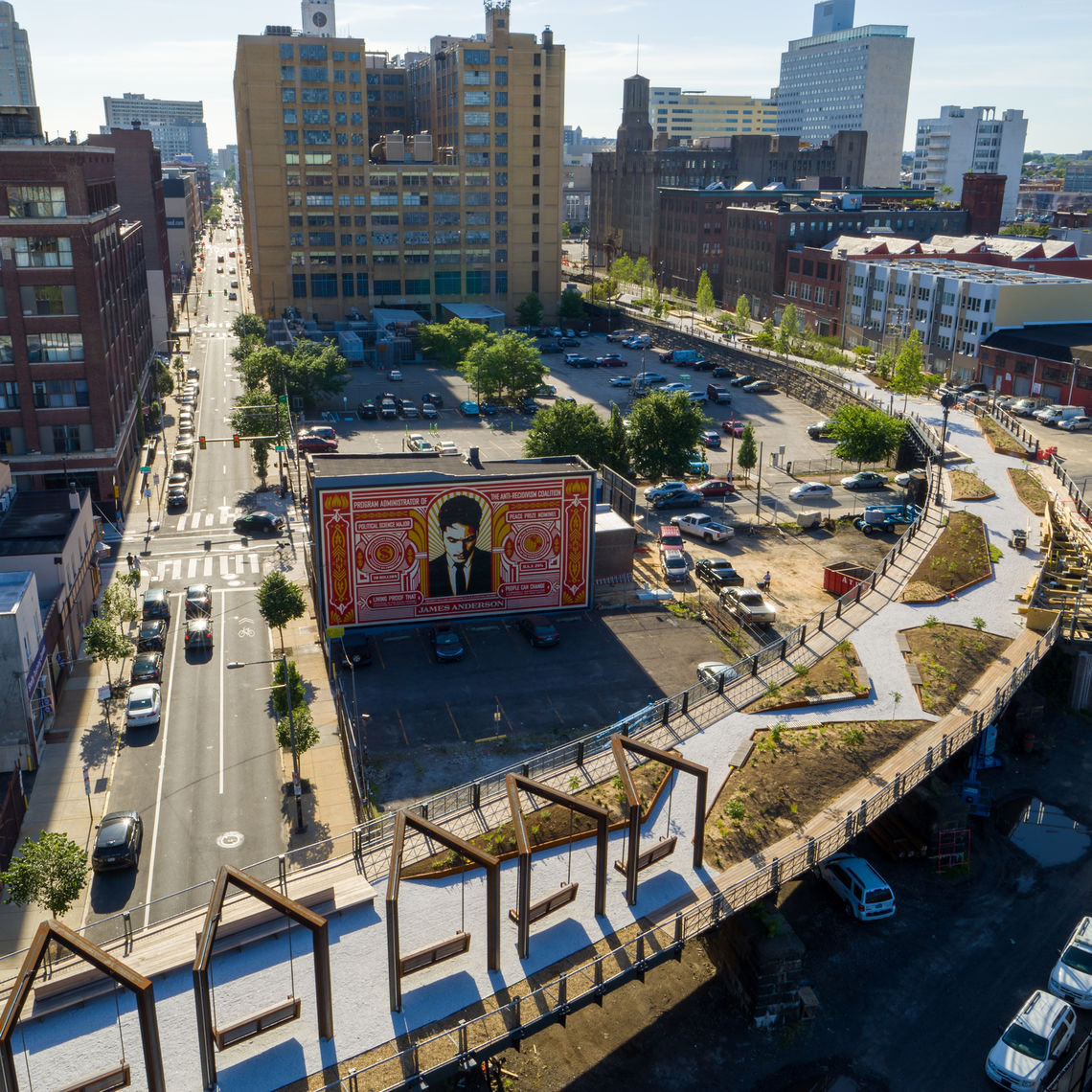 PHILADELPHIA (June 14, 2018) – City and state officials, philanthropic organizations, cultural and business leaders, neighbors and civic groups joined Center City District (CCD) President and CEO Paul R. Levy and members of the public for a ribbon cutting event to celebrate the official opening of Phase 1 of the Rail Park, a $10.8 million construction project that has transformed a blighted section of the former Reading Railroad Viaduct into an elevated park with walking paths, landscaping, lighting, swinging benches, and expansive city views. The project also included the reconstruction, landscaping and lighting of the 1300 block of Noble Street.

“It has been a top priority of my administration to bring recreation opportunities and green space to all neighborhoods,” said Mayor Jim Kenney. “Every community deserves to have vibrant, public spaces where everyone is welcomed. This park will not only help anchor Callowhill and the surrounding area, it will also serve as a stimulus for commercial and residential development in the neighborhood, and I appreciate all the stakeholders who made this project possible.”

The first phase of the eagerly awaited 25,000-square-foot park starts across from the former Philadelphia Inquirer building at Broad and Noble streets, includes the 1300 block of Noble, and runs southeast across 12th and 13th streets to Callowhill Street. Designed by Studio Bryan Hanes and Urban Engineers, the park is a much-needed green amenity to the Callowhill and Chinatown North neighborhoods on Center City’s northern edge. It was funded through a combination of state, city, foundation and private resources.

Rail Park, By the Numbers

“After years of planning, designing, and constructing, Center City’s newest park is now open,” said CCD’s Paul R. Levy. “In 2010, the Center City District began working with the surrounding community, planning, raising funds and finally overseeing construction of what is now a vibrant green space for the Callowhill and Chinatown North neighborhoods. Now, we look forward both to help maintaining this park and to transforming even more of this unused rail line into a unique park that will animate and connect diverse neighborhoods.”

SEPTA, owner of the spur upon which this first phase of the Rail Park is located, leased the land to the CCD for the duration of the construction work. With the completion of Phase 1, the CCD is turning it over to the City of Philadelphia, which will own the park. It will be maintained and managed in a three-way partnership of the city Department of Parks & Recreation, the Friends of the Rail Park, and the CCD.

“I am excited that the first phase of the Rail Park is opening today and that Parks & Recreation will play a major role in managing this wonderful park.” said Parks and Recreation Commissioner, Katherine Ott Lovell. “The public will be overjoyed once they have the opportunity to explore this unique park and experience its breathtaking view, marvelous giant swings and beautiful landscaping.”

The project has an enormous range of friends and supporters for whom the CCD is tremendously grateful: the Commonwealth of Pennsylvania, the City of Philadelphia, Mayor Jim Kenney, State Representative Michael H. O’Brien, City Councilman Mark Squilla, the William Penn Foundation, the Knight Foundation in partnership with the Fairmount Park Conservancy, Poor Richard’s Charitable Trust, The McLean Contributionship, Timberland, and a host of individual donors.

“Building on the efforts of my predecessor, Frank DiCicco, I have supported this project since I took office in 2012, and it is gratifying to see the initial phase of the Rail Park opening, for all to enjoy, in an area that has very little open space,” City Councilman Mark Squilla said. “I am excited to collaborate with all stakeholders on the future expansion of the park in my District.”

Built in the 1890s to carry passenger and freight trains into Center City, the viaduct consists of steel bridge structures, elevated filled areas and arched masonry bridges running from 11th and Vine streets to 9th Street and Fairmount Avenue, with a spur at Noble Street. After the last train traveled its rails in 1984, the viaduct rapidly succumbed to weeds and disrepair. In 1995, SEPTA acquired the quarter-mile-long spur – now the Rail Park -- that curves off northwest from the main branch.

The park’s design was chosen to reflect the neighborhood’s industrial roots and repurpose the historic elements of the rail structure wherever possible. A wide path through the park is edged with native canopy trees and other plantings designed to provide air quality benefits and manage storm water runoff, and interspersed with a variety of public spaces, wide platform benches, wooden bench swings and walkways.

The Rail Park’s Phase 1 is a proof-of-concept that will be used to advance the next phase of the project: the undeveloped area of the viaduct to the east of the Rail Park, extending from the main branch to 9th and Fairmount. 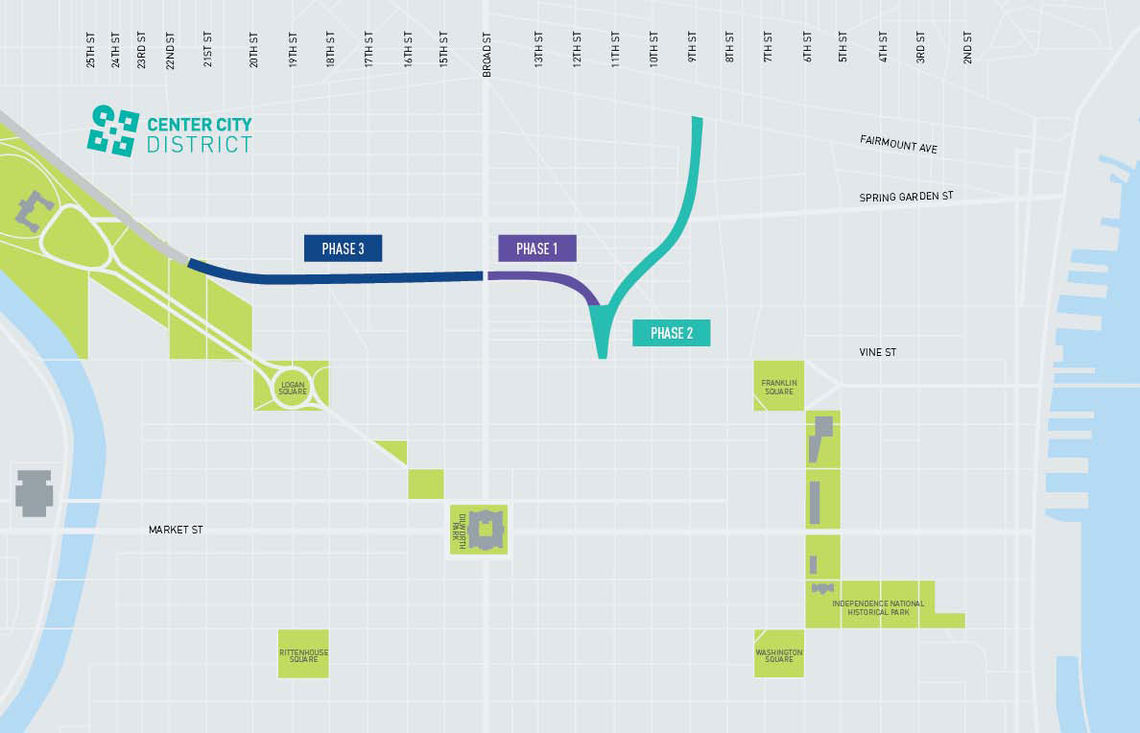 In 2010, with generous contributions from the William Penn Foundation and from Poor Richard’s Charitable Trust, the CCD commissioned a feasibility analysis of the entire viaduct from Vine Street to Fairmount Avenue. The consulting team was Urban Engineers, Cecil Baker + Partners, and Friends of the High Line, New York City. The City of Philadelphia retained Jones Lang LaSalle. The consultants jointly evaluated options that included total and partial demolition of the viaduct, as well as renovation alternatives, and assessed the potential impact of each option on real estate and community development in the area.

The study concluded that renovating the viaduct was far less expensive than demolishing it (at a cost of $50 million) and that significant environmental liabilities and costs could be minimized by removing, capping and covering any contaminated soil that might still exist in the fill beneath the tracks. Further, the team concluded that based on the experience in other cities, the project was highly likely to generate new investment in the surrounding area.

In 2011, based on these conclusions, and with further generous contributions from the William Penn Foundation and from Poor Richard’s Charitable Trust, the CCD commissioned schematic design and engineering by Urban Engineers and Studio Bryan Hanes. The planning, which focused on the SEPTA-owned spur only, was conducted in partnership with the Friends of the Rail Park, community stakeholders, the city’s Commerce Department and Department of Parks and Recreation.

In January 2012, after neighborhood meetings the previous fall to discuss community preferences and aspirations for the viaduct, the design team presented multiple design options at a community meeting with residents, property owners, and businesses from the area. Participants strongly favored making the park an informal space with plenty of shade trees, lush native grasses, shrubs and flowering plants, and with room to walk and sit. They wanted the park to maintain the industrial authenticity of its origins, while still meeting modern safety, code, and access requirements.

In March 2012, Studio Bryan Hanes and Urban Engineers, incorporating the preferences cited by community participants, presented renderings of a new public park on the SEPTA spur. The response from the community was enthusiastic, resulting in the selection of a preferred schematic design that led to the creation of the park as it is today. At the request of former Councilman Frank DiCicco, the City of Philadelphia generously funded the creation of construction documents.

In July 2016, the CCD began the competitive bid process based on construction documents prepared by Urban Engineers and Studio Bryan Hanes. In September 2016, Governor Tom Wolf announced the award of a $3.5 million Redevelopment Assistance Capital Program (RACP) grant to the CCD for the Rail Park, which enabled the project to move to the construction phase. Six qualified contractors bid on the project and the CCD selected A.P. Construction, a regional contractor with offices in Philadelphia, as the lowest responsible bidder for the project. Of the total project costs, 21% was subcontracted to Minority Business Enterprises and to Woman Business Enterprises.

On October 31, 2016, the Rail Park broke ground. For the 19 months that followed, the transformative work included:

For more information, photos and videos of the Rail Park, visit centercityphila.org/ccd-services/streetscape/rail-park.