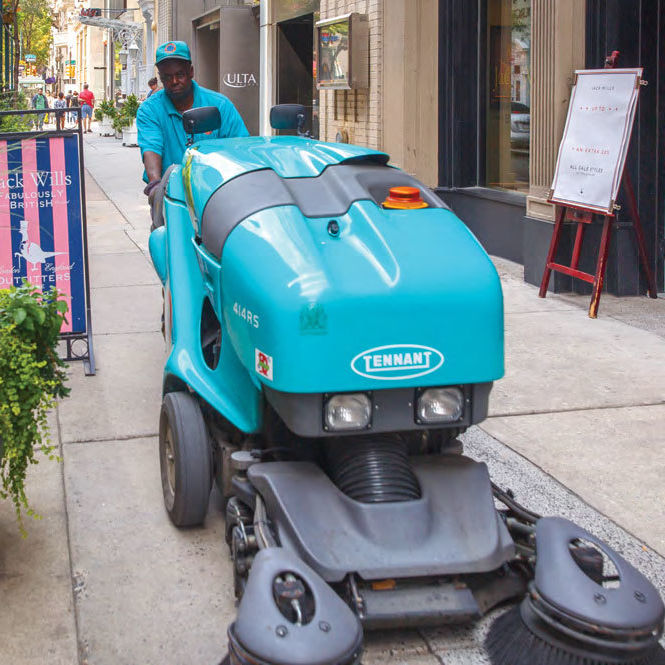 The CCD deploys more than 100 uniformed workers who manually sweep District sidewalks on two overlapping shifts, seven days a week, providing up to 14 hours of services per day. Mechanical sidewalk sweepers are deployed every morning so that Center City opens clean every day. Throughout the day, CCD’s uniformed cleaners manually sweep all sidewalks at least three times. The “pan and broom brigade” also sweeps

sidewalks in prime entertainment and dining areas in the evenings during the warm weather months. Except in winter, all sidewalks also get a monthly power washing to remove accumulated stains, gum and grime. Frequencies will increase in 2017.

Equipped with two-way radios and a smile, CSRs patrol parks and 22 walking beats throughout Center City, greeting people, providing information and directions and leaving behind a trail of good will. They provide a uniformed presence that enhances safety, serving as extra eyes and ears for police and other city operating departments, rendering first aid and offering other
emergency assistance. In 2015, CSRs recorded 160,417 sustained customer contacts, averaging 441 per day, with the vast majority being hospitality related.

Every other month, teams of CSRs survey the entire District with hand-held tablets and report on 83 different public space conditions. Everything is geo-coded, tied back to a database that lists the agency responsible for maintenance and quickly emailed to the responsible party. A week after the data are gathered, 23 city, state and other agencies participate in the
Public Space Collaborative meeting to review deficiencies and develop a correctional plan.

Equipped with two-way radios and a smile, CSRs patrol parks and 22 walking beats throughout Center City, greeting people, providing information and directions and leaving behind a trail of good will. They provide a uniformed presence that enhances safety, serving as extra eyes and ears for police and other city operating departments, rendering first aid and offering other
emergency assistance. In 2015, CSRs recorded 160,417 sustained customer contacts, averaging 441 per day, with the vast majority being hospitality related.

The CCD manages 1,500 banner poles and serves an average of 60 different non-profit, arts, cultural and civic organizations each year. Most banners are usually deployed for no more than four weeks. In 2016, the CCD installed 3,785 banners with Walnut and South Broad Streets as the most popular locations. Clients pay for the design and production of the banners, as well as the installation, which is managed by the CCD. Based on criteria set by the Philadelphia Art Commission, discrete corporate sponsorship recognition on the banners helps cultural institutions underwrite the costs.

Using a combination of metal halide lights and color-changing light-emitting diode (LED) fixtures, the CCD has lit the façades of a dozen historic buildings along South Broad Street (the Avenue of the Arts), allowing for programmed lighting effects ranging from subdued seasonal palettes to dynamic, special event sound-and-light shows.

Philadelphia is the first American city to light multiple, privately-owned buildings in a coordinated manner. In 2004, the CCD began illuminating the monumental City Hall structure nightly, from its base to the tip of the William Penn statue atop the tower, 550 feet in the air. Partnering with the owners of seven buildings surrounding City Hall, the CCD installed roof-mounted light fixtures to illuminate all four façades of the historic building and tower, not only increasing its nighttime visibility but also animating the surrounding plaza and sidewalks. During the Democratic National Convention in July, the lighting included patriotic-themed
red, white and blue, plus stars on City Hall.

Since 1997, the Center City District has invested $44 million in District resources, leveraging $88 million in public, private and foundation resources to make $132 million in capital improvements downtown to enhance the pedestrian environment, make public transit more accessible, enliven and beautify the streetscape, illuminate cultural and architectural assets, and transform parks. The CCD completed renovations to Aviator Park (across the street from the Franklin Institute) in 2007; Cret Park (16th & Benjamin Franklin Parkway) in 2008; John F. Collins Park (1707 Chestnut Street); Sister Cities Park (18th & Benjamin Franklin Parkway) in 2012; and Dilworth Park (at City Hall) in 2014. The CCD manages, maintains and programs all the parks except Aviator Park. In addition, the CCD has added many other improvements and routinely maintains them on blocks throughout the entire District.

Since 2007, CCD has renovated, manages and now programs four parks and three cafés in Center City, cutting the ribbon in September 2014 on the $55 million transformation of Dilworth Park, bringing CCD’s capital investment in the public environment to $132 million since 1997. With the Rothman Institute Ice Rink, three fountains and a pond in our parks, with programming for children and adults, the ability to host events, weddings and special events, CCD has taken on more complex management challenges while still remaining committed to the basics: clean, safe and well-lit walkways.

Sister Cities Park at 18th Street and the Benjamin Franklin Parkway was designed as a multi-generational public space for families with children, office workers, and visitors to Parkway
institutions. Through the Center City District Foundation, we are exploring ways to make the park even better. The CCD provides programming for children and adults, including Fall Family Fun
Days.