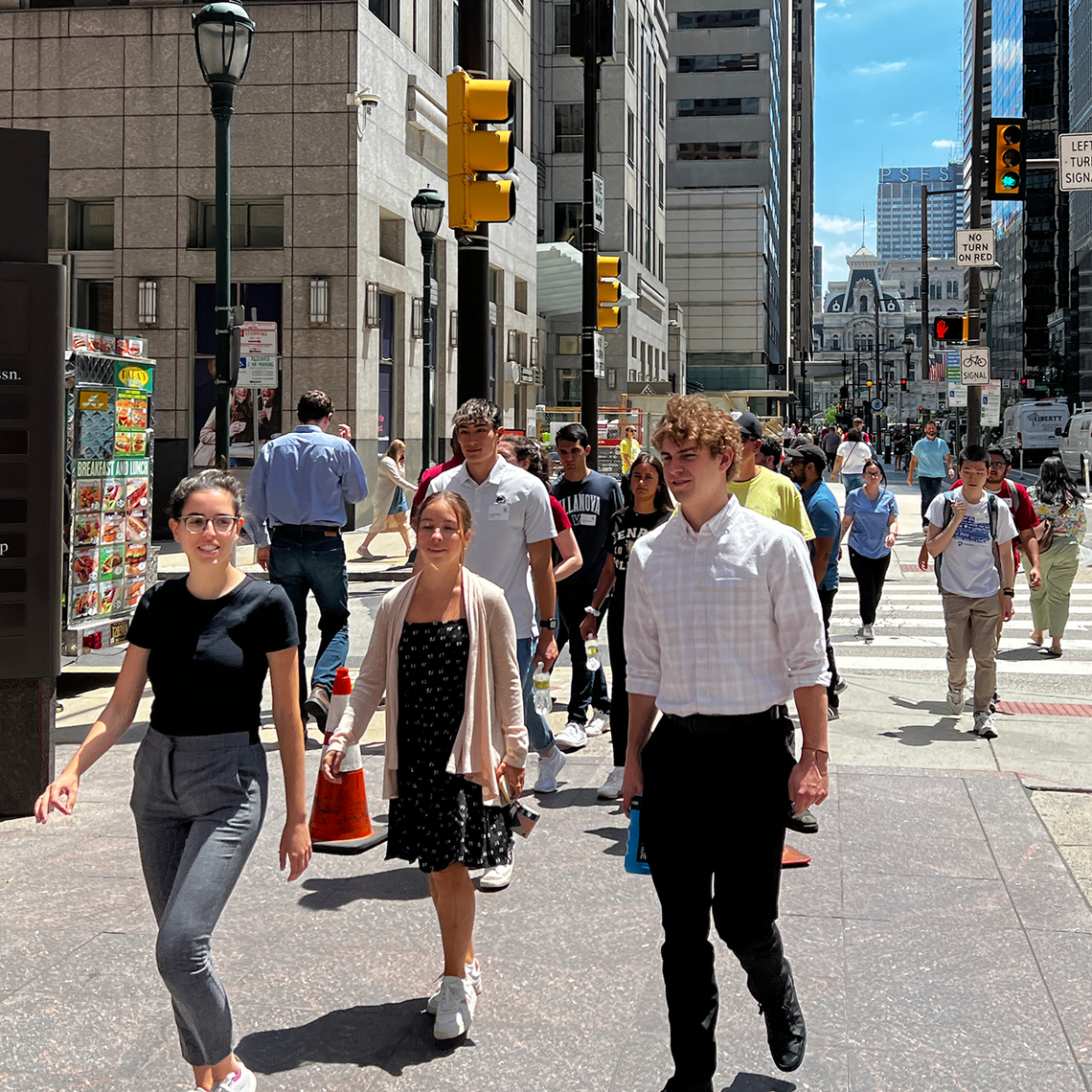 Philadelphia can draw both solace and affirmation from Aesop’s fable of the hare and the tortoise. Some cities, whose growth accelerated in the last two decades, adding tower upon tower, now struggle with empty canyons in their office districts.

Meanwhile, slow and steady Philadelphia used our path-breaking, 10-year tax abatement during the last 20 years to convert close to 10 million square feet of former office and industrial space downtown to apartments, condos and hotels. “Do you ever get anywhere?” the hare asked the tortoise with a mocking laugh. To which the tortoise replies replies, “Yes, we have probably fashioned the most diversified downtown in the United States.”

There are more than 70,000 residents living between Vine and Pine streets and another 130,000 in immediately adjacent neighborhoods. With major health care institutions, 13,000 hotel rooms, a rebounding hospitality industry and a diverse range of arts, culture, shopping, dining and entertainment venues, pedestrian volumes on Center City sidewalks are approaching pre-pandemic levels, even if only 52% of office workers were back during the summer, usually three days per week.

However, anyone proffering a vision of downtown as just a bedroom community and entertainment zone completely misunderstands the complexity and interconnectedness of the downtown and regional economy. More than 310,000 jobs — 42% of Philadelphia’s employment — were located in Center City in 2019. Those who have studied the restructuring of work during the pandemic nationwide estimate that at least 55% of jobs can only be performed in person. These are positions in the service, maintenance, distribution, hospitality, restaurant and retail sectors, requiring less formal education, but often highly reliant on the presence of more educated workers. In Center City, twothirds of all jobs in 2019 required less than a college degree, providing opportunity for neighborhood residents who relied on SEPTA to connect with family-sustaining jobs. If many workers remain remote, other jobs vanish.

Estimates suggest that just 15% of jobs can be fully remote, leaving about 30% in that not-yet-fully-defined zone of hybrid work. Several studies suggest that productivity has not declined in many businesses that have gone remote and may actually increase as employees save time on commuting. But productivity measures the performance of known routines and tasks aligned with current realities. Creativity and innovation are how organizations stay ahead of the curve, respond to new opportunities and stay competitive. Optimally, this is done collaboratively and often in person. Economic history is littered with the wreckage of firms who kept doing the same old thing as the world around them changed. In this moment of profound transformation, it’s best not look to ghost offices or ghost towns for inspiration.

The pandemic and mandated shutdowns extended a new perquisite to employees: the ability to work from home. Benefits, once extended, are exceedingly hard to withdraw. Worker satisfaction is extraordinarily important but it is not the same as innovation, competitiveness, mentoring and growth. This creates the central challenge for businesses: determining the appropriate functions and frequency of office use, redefining the purpose of the organization and inspiring workers to be part of that mission.

Establishing a Supportive Context
CCD has long focused on the space and experience between buildings. Restoring confidence in downtown as the setting for work, for living and for entertainment is at the center of our mission. We have steadily ramped up safety, outreach and crime prevention efforts, forging new partnerships with public and private security and with social service organizations, to create a welcoming environment for everyone downtown. In addition to 110 sidewalk cleaners who sweep and pressure wash sidewalks and remove graffiti seven days a week, our three public safety programs have expanded to more than 90 staff.

Community Service Representatives: CCD’s unarmed, uniformed safety ambassadors known as Community Service Representatives (CSRs) have provided a friendly, helpful and highly recognizable presence on downtown sidewalks for more than three decades. After raising salaries for CSRs this spring, CCD is increasing the number on-street from 40 to more than 50 by mid-fall. CSR foot patrols are equipped with two-way radios and serve as “eyes and ears” on the street. They provide information and directions, administer first aid, request police and EMT services and provide outreach to unsheltered individuals. Specially trained CSRs also survey every block in the Center City District monthly, reporting overflowing municipal trash cans, non-functioning street lights, damaged traffic signs, or clogged storm drains. CCD communicates problems to the responsible agency and follows up to ensure appropriate attention. With creativity, funding and strong management, programs like this could be replicated citywide.

Bike Patrol: The bicycle safety patrol launched in fall 2020 and expanded in spring 2022 to provide enhanced, mobile, public safety services within the District to accelerate the recovery process. Contracted through Allied Universal, the bike patrols are coordinated with both the CSR program and the Philadelphia Police Department. This month, CCD is increasing these uniformed patrols, which operate seven days per week in two shifts, to more than 45 positions. This will enable deployment to increase from 20 to 25 bike patrol staff on the street each day – 15 on the day shift (11 a.m. to 7 p.m.) and 10 on the afternoon/night shift (3 p.m. to 11 p.m.).

Homeless Outreach: The Ambassadors of Hope (AoH) program initiated and funded by CCD since 2018 is expanding from two to three outreach teams. Each team currently consists of a Project HOME social service worker, a crisis intervention trained Philadelphia police officer from the Central Service Detail and a Community Service Representative Homeless Outreach Team member from CCD, along with a CSR manager with a vehicle available to transport those in need to services and shelter. The teams patrol on foot, covering the entire District, Monday through Friday, 8:30 a.m. to 3:30 p.m., with daily emphasis on engaging with chronically homeless individuals at recurrent locations.

In October 2021, CCD added a mental health outreach worker from Penn Medicine to the AoH teams, bringing specialized expertise and connections to additional networks offering addiction treatment, shelter and housing for individuals with mental health and cognitive issues and the ability to assess and prepare mental health committal petitions for individuals in crisis. This month, a third team is being added, working Tuesday’s through Saturdays. Through consistent interaction with the AoH teams, more than 500 unsheltered clients have accepted help and were transported to service or treatment providers geared toward their individual needs, shelter or housing, with CCD providing the transportation in about 80% of the cases. In 2021 alone, 140 individuals accepted services and came off the street. More than one-third of those accepting help were chronically homeless individuals who had resisted placement in the past. This model of co-delivery of services is an essential part of the redefinition of public safety occurring across the country.

The CCD is now also routinely hosting meetings of federal, state, city and transit law enforcement professionals and private security firms working for major downtown employers and institutions to ensure continuous communication and coordination, creating an effective network of on-street deployment, compensating for scarce resources. SEPTA has also implemented this co-delivery model with enhanced safety services deployed in partnership with drug and alcohol teams across their entire system. In 1990, Center City faced equally daunting challenges with perceptions and realities. We recovered once; we can do it again.

Accentuating the Positives
An extraordinary array of amenities remains a defining strength of Center City. As outlined on page 8, CCD is expanding efforts to promote restaurants, retail and theaters on the Avenue of Arts with discounted tickets throughout the fall in a new Dinner and A Show initiative. Sister Cities Park, Café Cret and Dilworth Park are being actively programmed with arts, cultural and other attractions that appeal to a broad range of workers, visitors and regional residents. New landscaping in the office district is part of a larger effort to reposition the blocks with the densest concentration of jobs in Philadelphia.

Innovation and creativity happen not only in purpose-built office spaces, but in the cafes, restaurants and public spaces of a thriving, live-work downtown. West Market and JFK from 15th to 22nd Street may be the setting for 24 major office buildings, but there are also seven residential buildings, two hotels and one soon-to-be-vacated office building. A better mixture of uses could actually make existing office and retail space more attractive to diverse new users and animate sidewalks on a more sustained basis.

Rethinking the Future
But ultimately, Philadelphia’s success depends on our ability to nurture, expand and attract business to provide more jobs. If some existing firms downsize in a healthy economic ecosystem, emerging new ones move into vacated space. As noted in our recently released report, Firing on All Cylinders: Growing Jobs and Small Business (see page 10), Philadelphia has excelled in hospitality, health care and education, but seriously lagged in other 21st century industries that drive the economies of competitive cities and create demand for burgeoning small and Black- and brown-owned enterprises.

At the heart of our challenge lies a tax structure that has deterred growth throughout the city and constrained opportunities for too many residents. With remote workers exempt from the wage tax and, if businesses downsize, local government will find it increasingly difficult to fund needed services. The related commentary based on the report that appears in The Philadelphia Citizen, titled Without More Jobs, Our Future is Limited, notes that the success of this mayor and the next will be judged not only by their ability to respond to the urgent public safety crisis, but also by the compelling need to change the trajectory of a place with fewer jobs and businesses per resident than comparable cities and our own suburbs. The crisis of 1990 prompted a restructuring of Philadelphia’s fiscal management, established a path to tax competitiveness and laid the foundation for a remarkable revival. This crisis requires nothing less.

But Philadelphia remains challenged by post-pandemic realities and by insufficient jobs elsewhere in the city. Economists refer to moments such as this as a time of “creative destruction” when those who stand still, fall behind. However, racing off impetuously with no sense of direction is equally problematic.

With a clear-eyed diagnosis and well-thought strategy, slow and steady is not a bad way to proceed. Philadelphia’s business, civic and political leaders need to rise to the occasion. Paul R. Levy President plevy@centercityphila.org