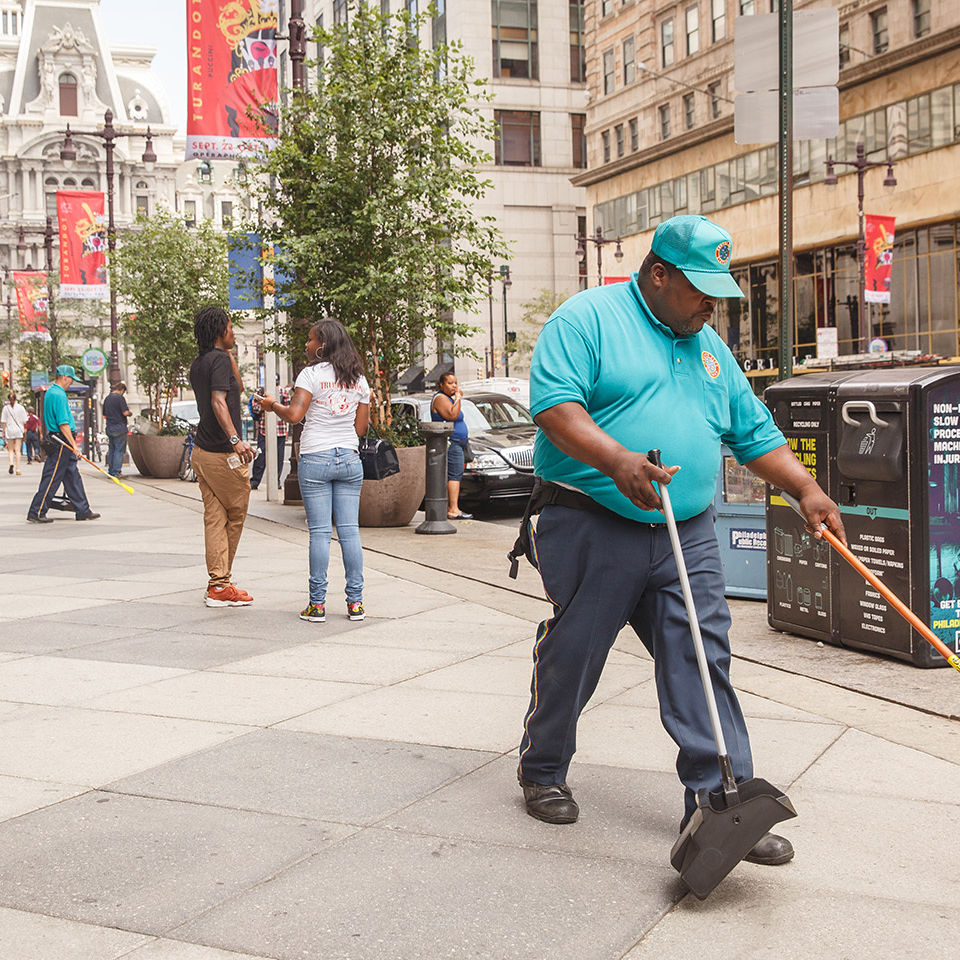 For 26 years, the Center City District has enhanced public spaces, reinforced private investment and supplemented municipal services with a simple, but ambitious vision: a clean, safe and attractive Center City. Every five years, we present a new plan and budget to District property owners, tenants and residents providing an overview of our programs, services, funding and proposed new initiatives to enhance Center City as a competitive place for business and an attractive setting to work, live and visit. You can download our proposed 2018-2022 Plan and Budget at www.centercityphila.org.

Today, more than 80 uniformed sidewalk cleaners and supervisors work seven days a week, manually and mechanically cleaning sidewalks and CCD-managed parks to ensure that Center City opens clean each morning, while remaining clean throughout the day and early evening. Specially trained crews remove graffiti from the ground floor of building façades, light poles, signs and street furniture. With increased pedestrian activity and a growing residential population, CCD will expand these services, covering more of the prime entertainment and dining zones during our early evening shift in warm weather months.

Complementing cleaning crews, the CCD deploys 50 uniformed Community Service Representatives (CSRs) who work in
partnership with the Philadelphia Police Department seven days a week to deter crime. CSRs also provide a welcoming presence for workers, residents, and visitors and engage in outreach services to homeless individuals. These public safety ambassadors stand joint roll call with the Philadelphia police officers who staff the CCD’s police substation. They coordinate deployment and share information based on computerized crime-mapping analysis by CCD staff. CSRs are first aid/CPR certified and provide services to those in need. Since the CCD commenced operations, both serious crimes and quality-of-life crimes have been dramatically reduced, though aggressive panhandling remains a challenge we are committed to addressing in partnership with City government and downtown businesses.

Overall, the visibility of uniformed CCD personnel is essential to our mission: sidewalk cleaners working throughout the day and evening hours send the reassuring message that someone is responsible for the management of public spaces. CSRs provide information and directions to pedestrians.They serve as “eyes and ears” for the police, report a broad range of other quality-of-life problems to the responsible public agencies, and follow up so problems get addressed.

The CCD maintains nearly all of the $146 million in capital investments in streetscape and public space enhancements we’ve made in the last 20 years, routinely cleaning, updating and refurbishing an inventory of 674 pedestrian and vehicular directional signs, 258 diskmaps, 240 transit portal signs at 84 portal entrances, 66 bus shelter map signs and 55 interpretive signs along the Benjamin Franklin Parkway. The CCD maintains trees, planters, hanging flower baskets and 260 of the 2,189 pedestrian light poles we installed since 1996 (the remainder are maintained by the Philadelphia Streets Department).

CCD programs the 446 light fixtures we installed on 12 building facades along the Avenue of the Arts and maintains 74 light fixtures that illuminate 20 sculptures on the Benjamin Franklin Parkway. Through our new plan and budget, CCD will install more landscape enhancements, add more pedestrian-scale lighting, upgrade existing fixtures and expand façade lighting on the Avenue of the Arts. In 2016, CCD also installed 3,785 banners, 289 transit shelter posters, and 179 digital signs as a reliable and affordable means for arts, cultural and civic organizations to communicate to their audiences.

CCD renovated, manages and programs four Center City parks that are within a half-mile walk for half of downtown’s workforce and a quarter of Greater Center City’s residential population. On any given day, you can see office workers and shoppers eating lunch in John F. Collins Park, visitors and medical students enjoying a cup of coffee or a drink after work at Cret Park, and children playing in Sister Cities Park. Sitting atop the city’s subway and trolley lines and a short walking distance from Regional Rail, Dilworth Park has become a major destination for residents and workers from across the city and region, with both winter and summer attractions. CCD provided nearly 200 public events in 2016 and Dilworth Park averaged 35,000 visitors a day, with peak volumes during summer and winter holidays reaching almost 60,000 pedestrians a day. Transforming a space no one cared to visit into a place where everyone wants to be: that is the essence of the CCD’s mission across the entire downtown.

Just north of Vine Street, CCD is managing construction of the first phase of the Rail Park. When completed in early 2018, the Rail Park will become the city’s newest elevated public park with a distinctive design that celebrates Philadelphia’s industrial past and cultural heritage and helps define a thriving, mixed-use neighborhood. Through our new proposed plan and budget we will expand our services in partnership with the City and a local friends group to ensure the high quality maintenance of the completed Rail Park.

To position Center City as a competitive business location, the primary regional destination for dining, culture, entertainment and shopping and to enhance the downtown as a premier place to live, the CCD produces and distributes office, retail and residential marketplace information both in print and on-line. The CCD communicates to diverse audiences through a wide range of media, managing multiple websites, one print and five email newsletters, as well as social media platforms such as Facebook, Twitter, Instagram and Flickr.

The CCD produces several District-wide events each year designed to promote Center City’s restaurants and retailers, including Center City District Restaurant Week and Center City District Sips, and provides programming and special events in CCD-managed parks. This year, given the growing interest from businesses moving into Center City, we’ve expanded our website with new content to support business attraction. All of this is made possible by the property owners, businesses and residents who support the CCD.

Center City in 2017 – a vibrant, mixed-use, 24-hour downtown – is light-years away from conditions we confronted in 1991. But complacency and celebration of the status quo are never hallmarks of successful cities. Most downtowns are thriving and changes at the national and state level could challenge Philadelphia even more, requiring greater efforts locally to manage and enhance our competitive assets to ensure more robust and inclusive growth. CCD’s 2018-2022 Plan and Budget is our contribution to that larger task.