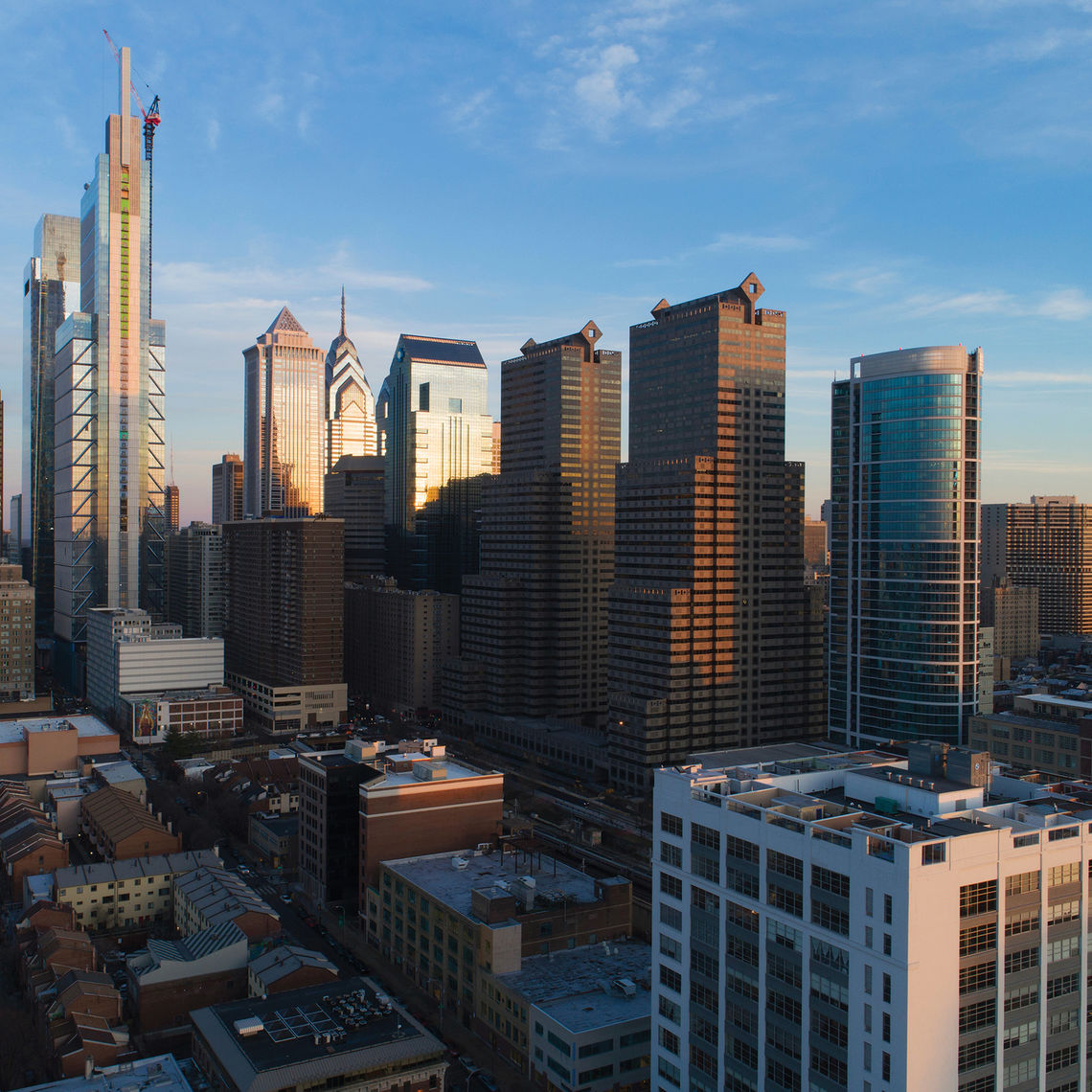 Philadelphia is enjoying its longest economic expansion of the last 50 years, adding 55,100 jobs since 2010, growing in all but one year since 2005. In 2016, a record 13,600 jobs were added; in 2017 we grew 10,700 more – all private-sector; the public-sector has contracted for the last 25-years. By local standards, private sector growth is very good news. By national, urban standards, things should be significantly better.

Center City, the largest workplace in the city and region, accounts for 42% of Philadelphia’s jobs with 298,612 wage and salaried positions and another 9,000 self-employed individuals, freelancers and those compensated as partners, for a total 307,000 employees.

Located at the center of the region’s transit and highway network, 48% of downtown jobs are held by commuters from outside the city who pay the city wage tax and also patronize downtown restaurants, retailers and cultural institutions; 52% of jobs are held by Philadelphia residents, with the city’s share of jobs steadily increasing as the downtown population has grown.

Since 2010, 25% of those who moved into Philadelphia moved downtown, making it the fastest growing neighborhood with 190,000 residents. This vibrant live-work core is just 6% of the city’s land area, but generates 32% of property tax revenue for the City and School District, more than 50% of BIRT, and almost 50% of the wage tax.

Philadelphia’s 25.7% poverty rate puts us atop the 10 largest cities. The downtown story is about millennials and empty-nesters moving in, families having children. But in many other neighborhoods, working and middle class families are still leaving for the suburbs.

Downtown, 65% of residents have BA degrees; citywide, only 26%, and many young people don’t ever finish high school.

Such disparities inspire facile references to Dickens’ A Tale of Two Cities. But the Philadelphia story is not a tale of two cities; it’s a tale of one city not growing fast enough to address problems we’ve inherited at a time when we can’t rely on higher levels of government for much help.

After shedding 25% of jobs since 1970, recent growth is grounds for celebration. But compared to other cities we should be doing much better. While private sector growth was particularly strong in 2016 and 2017, with the city’s rate surpassing that of the region and nearly catching up with the nation as a whole, Philadelphia has not kept pace with America’s 26 largest cities. Since 2009, the largest cities outperformed the national economy, adding private sector jobs at an average of 2.3%
per year, compared to 1.4% in Philadelphia.

Recent trends lifted Philadelphia above Baltimore and Memphis, but still behind 23 other cities including: Boston, Detroit, New York City, Washington D.C., as well as the national rate of 1.7% per year.

Those who have lived in Philadelphia for decades glance in the rear-view mirror, marveling how far we have come. Mobile millennials, with substantial college debt, fill sidewalks and apartments in Center City and take the vitality for granted. But on social media, they communicate with friends in cities that are passing us by. Philadelphia offers affordability; our peers, greater opportunity.

More than millennials are discouraged by slow growth; 52% of downtown jobs are held by Philadelphia residents. Public transportation makes possible a level of density and accessibility unmatched in the region, concentrating jobs at 59 per acre in Center City and at 38 per acre in University
City, compared to 4 per acre in the rest of Philadelphia and less than 1 per acre in the suburbs. Transit accessibility also enables 25% of the workers living in city neighborhoods outside Greater Center City to commute to jobs downtown; another 6% work in University City. In all of these neighborhoods, more people work downtown than in the area where they live. While 37% of jobs require a bachelor’s degree, downtown’s diverse employers have openings at all levels: 30% require an associate’s degree, another 33%, just a high school diploma.

But renewal in Center City and University City is simply not big enough to offset citywide industrial decline. Our past dependency on industrial jobs can no longer suffice to explain slow growth. Other Northeast cities that hemorrhaged manufacturing rebounded with more robust, post-industrial growth. Using 1970 as baseline, New York’s employment is up 11%; Boston and Washington, D.C. are both up 23%. Philadelphia has 26% fewer jobs than it did in 1970, similar to Detroit.

This is a prime reason for Philadelphia’s high poverty and unemployment rates. Slow recovery is also why 40% of working residents from each Council District outside downtown (211,000 workers) reverse commute to the suburbs. Education requirements there are not significantly different than for jobs in the city. The suburbs simply have more jobs and, until recently, continued to add them faster. Philadelphia has 5% fewer jobs than in 1990; suburbs are up 26%.

Because Philadelphia’s wage tax requires employers to withhold the full amount, regardless of where a city resident works, commuting to the suburbs carries an incentive to move there. While good schools matter, 81% of households that left Philadelphia between 2010 and 2016 did not have children. Philadelphia is also the only big city with a Business Income and Receipts Tax (BIRT) on both gross receipts and net income, adding a 20%-50% premium over suburban costs.

It’s not that we tax too much; we tax the wrong things. Philadelphia is unique among major cities because our municipal government is 60% dependent on taxing what easily moves — employee wages and business revenues. We’re out of sync with mobile, 21st century, post-industrial realities and are left with slow and uneven growth.

Since 1990, education and health care, (largely exempt from real estate, use and occupancy and business taxes) have expanded by 54.2%. Lower wage leisure and hospitality, entry level positions in which we invested heavily, are up 62%. But office jobs, the largest and most diverse source of opportunity, are down 15.7%.

The opening of the new Comcast Technology Center, the retention of Aramark’s corporate headquarters, the rapid growth of startups, investments in innovation made by major employers and local institutions and the eagerness of suburban firms to connect with Center City’s educated, skilled workforce are all positive trends upon which to capitalize. So too is the dynamic growth in University City and the collaborative work and positive messaging that emerged from the pursuit of Amazon.

Philadelphia’s decline in the early- to mid- 20th century resulted from overreliance on contracting manufacturing employers, complacency and failure to capture the growth of post-industrial and emerging innovation industries. Our success in the 21st century must be built upon a relentless impatience with the status quo.

Avoiding the Politics of Resentment

The disparities between the thriving and declining sections of the city are enormous and the temptation is strong to fall into a politics of resentment with anti-growth rhetoric. Our national politics are already consumed by extremes — a tendency to pit one group against another.  Philadelphia needs to steer clear of that trap, seeking far more pragmatic solutions that work locally. Instead of pitting the interests of market rate development against the needs of lower income residents, elected officials should focus on aligning both around a strategy of job growth for all.

The federal government is steadily reducing the social safety net. State resources are constrained as well. If Philadelphia is going to make any impact on its 25.7% poverty rate, the highest of America’s 10 largest cities, it simply has to create the type of competitive environment that grows private-sector jobs at a faster rate, as other cities have done.

Philadelphia needs to commit not only to its public schools, but also to comprehensive tax reform. We can grow jobs citywide if we reduce local government’s dependency on highly mobile wages and business revenues and rely more on an expanding base of the local property tax to fund municipal services and improve public schools. But if we keep raising taxes, residents of many neighborhoods will continue to leave for greater opportunities in the suburbs.

If local growth since 2009 were robust enough to make us just average, attaining the 2.3% rate of growth of America’s largest cities, Philadelphia would have added an extra 45,400 jobs (equal to one home-grown Amazon) on top of existing growth of 55,100 for a total of 100,500 new jobs. The unemployment rate, which dropped from 10.9% in the depths of recession to 6.2% in 2017, could have dropped more, expanding the tax base and generating more revenues for the city and schools without raising rates. It’s time for Philadelphia to focus on a strategy for much more dynamic and inclusive growth.

Adapted from the introduction to State of Center City 2018.