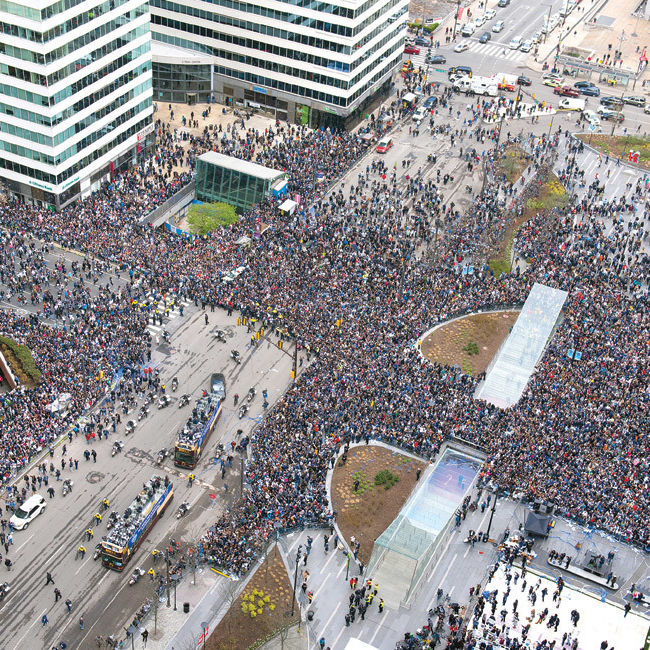 Think about it. A suburban university wins the national basketball championship and selects Center City as the place to celebrate. Villanova is offered the option of a parade ending inside the Pennsylvania Convention Center or outdoors at Dilworth Park.

An estimated 60,000 — many still reveling in the three-point buzzer shot, others just starved for any national sports championship — packed the park, overflowed onto 15th Street and stretched back along the parade route on Market Street. As Laurie Olin, lead landscape designer for Dilworth Park, emailed after joining the crowd, “I remember saying at the beginning of the design process that one of the reasons to redo the space was to have a place in Philadelphia where everyone could come together if one of our teams ever won something again.”

Add to Dilworth Park’s event list of art exhibits, demonstrations, fundraisers, ice-skating parties, receptions, weddings and an impromptu Stevie Wonder concert — one national championship. May there be many more.

Many such encouraging signs of momentum are documented in CCD/ CPDC’s State of Center City, 2016 report. With construction cranes everywhere and pedestrian volumes surging, there are ample reasons to celebrate. Still, the State of Center City too often finds reason to append the word “but” after many positive trends.

Take the remarkable growth in market share of regional housing starts. No doubt, we’ve climbed out of deep deficit. But 34% of new units closely mirrors Philadelphia’s share of the region’s population. We’re really just holding our own. There’s also been a sharp decline in suburban housing permits.

Job growth remains uneven. Education and health services, our largest employment sectors, are up by 50.5% citywide since 1990; leisure and hospitality is up 51.2%. But officeusing industries like professional and business services are down 1.2%, with finance, real estate and communications plummeting 43.3% in the last 25 years. A simple measure of success is the premium businesses will pay in office rent to be in the employee- and amenityrich CBD, as opposed to the suburbs. Sampling major markets nationwide, Newmark Grubb Knight Frank found an average CBD premium of 25% in 2015 – rising to 112% in Boston and 75% in Washington, D.C. In Philadelphia, the premium was just 4%.

We’re in the midst of an urban-led recovery. Since 2010, large cities outpaced the broader economy. While private-sector jobs expanded nationally at 2.1% per year, the 25 most populous cities grew 2.7% annually. Philadelphia has grown, but by just 0.9% per year. No doubt, the national urban average is elevated by Sun Belt growth hubs like Austin, San Francisco, and San Jose. But Columbus, Detroit, Indianapolis and Memphis have outperformed Philadelphia since 2010, as did Boston, New York, Baltimore and Washington, D.C. High unemployment and poverty result from our lagging job growth. Center City and University City may be prospering, but it will take a higher tide to lift all boats.

Boston, New York and Washington, D.C. have more than replaced jobs lost since 1970. Their unemployment and poverty rates are lower. Philadelphia still has 28% fewer jobs than in 1970. Dozens of tech startups, hundreds of neighborhood-based personal and professional services firms and the expansion of Comcast all demonstrate that Philadelphia has no shortage of entrepreneurial talent. Universities are investing in innovation to spur new growth. But Philadelphia is constrained by a tax structure that hasn’t kept pace with the changing economy. Small and minority businesses struggle to add employees in a slow growth setting. We’re limited in export industries that generate wealth for the region. Reliance on wage and business taxes may have made sense in the industrial age, built on fixed assets like factories and railroads. But in today’s highly-mobile, digital economy, our tax structure depresses growth at the very moment the city’s intrinsic advantages have come to the fore.

State legislation endorsed by Mayor Jim Kenney and a broad cross-section of business, labor and civic leaders enables the city to reduce dependency on highly mobile wages and business revenues and rely more on the property tax – also the foundation for funding schools.

Philadelphia stands at a crossroads. This is a moment to capitalize on our extraordinary strengths, our concentration of talent and geographic position. It’s time to stop settling for second-rate growth and create many more opportunities for all city residents, new immigrants and for graduates of our colleges and universities. No ifs, ands or buts.