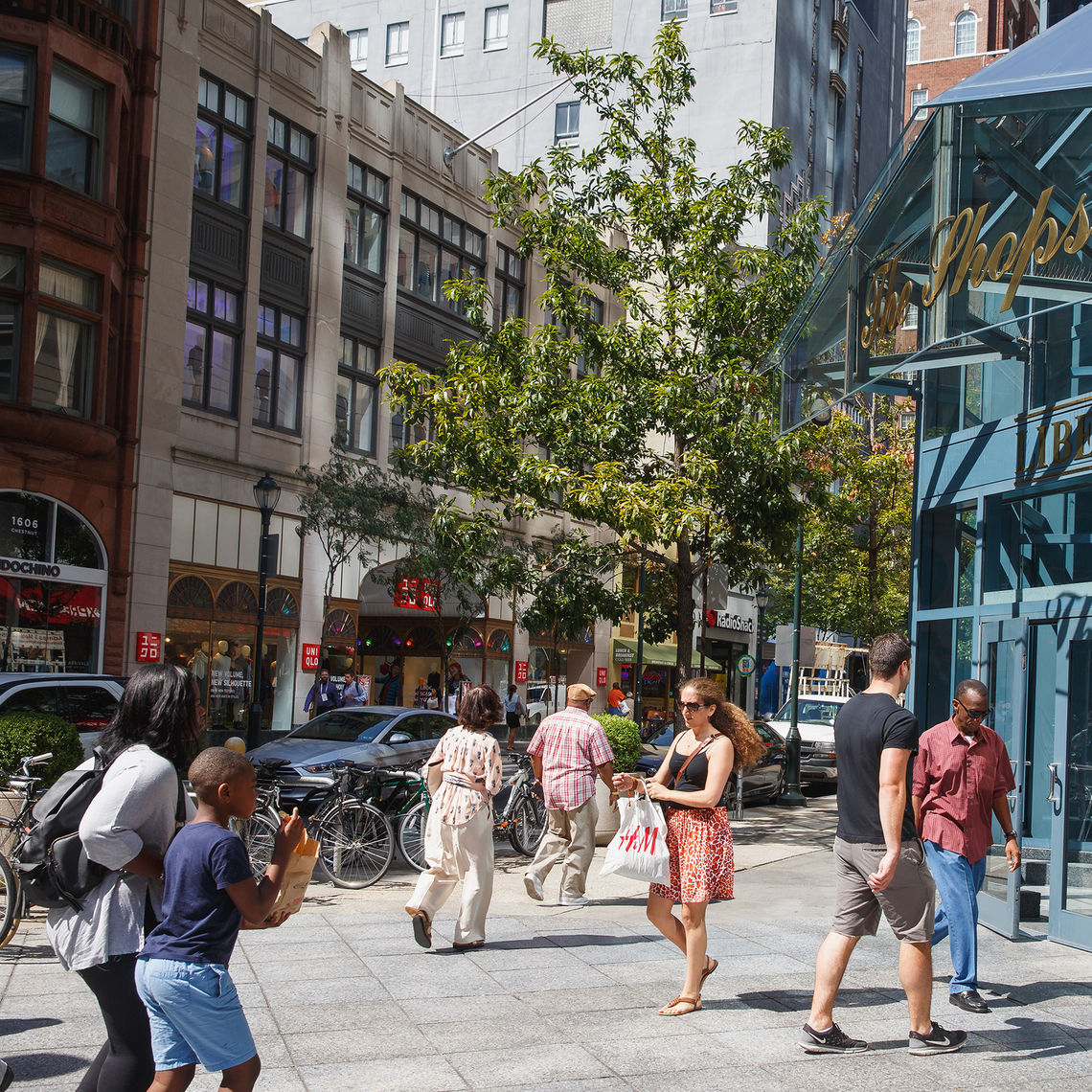 The Fragility of Revival

“Is city growth slowing?” That’s the question urban demographer William Frey asked last May after analyzing recent census data for major metro areas.1 In the last seven years, cities have outperformed both their suburbs and the national economy in job growth as they bounded back from the Great Recession.
Population data too, had suggested cities were outpacing their suburbs, perhaps signaling the reversal of 70 years of sprawl.

Some proclaimed this the century of the city, conflating rapid third-world urbanization with North American city center revival. Others asserted the corollary: the suburbs are over. But even in 2010, skeptics suggested millennials and others might simply be deferring home purchases due to job uncertainty and doubts about long-term appreciation of suburban prices. After all, many millennials watched their parents experience a painful loss of value in their primary assets.

In new data for the period 2011 to 2016, Frey detected a distinct slow-down in urban population growth that ought to give us pause (Figure 1). Already in 2010, population was rising more slowly in Philadelphia than in Boston, New York or Washington. Philadelphia’s rate of growth is also converging more quickly than our peers with suburban trends, limiting our ability to regain market share (Figure 2).

Note however, we are not looking at decline, just the deceleration of growth in both the city and region. Further, these findings come from limited sampling by the Census Bureau, so it’s best to wait for the 2020 census to be sure. Still it’s a caution flag, especially since Philadelphia long trailed the 25 largest cities in job growth, too (Figure 3). 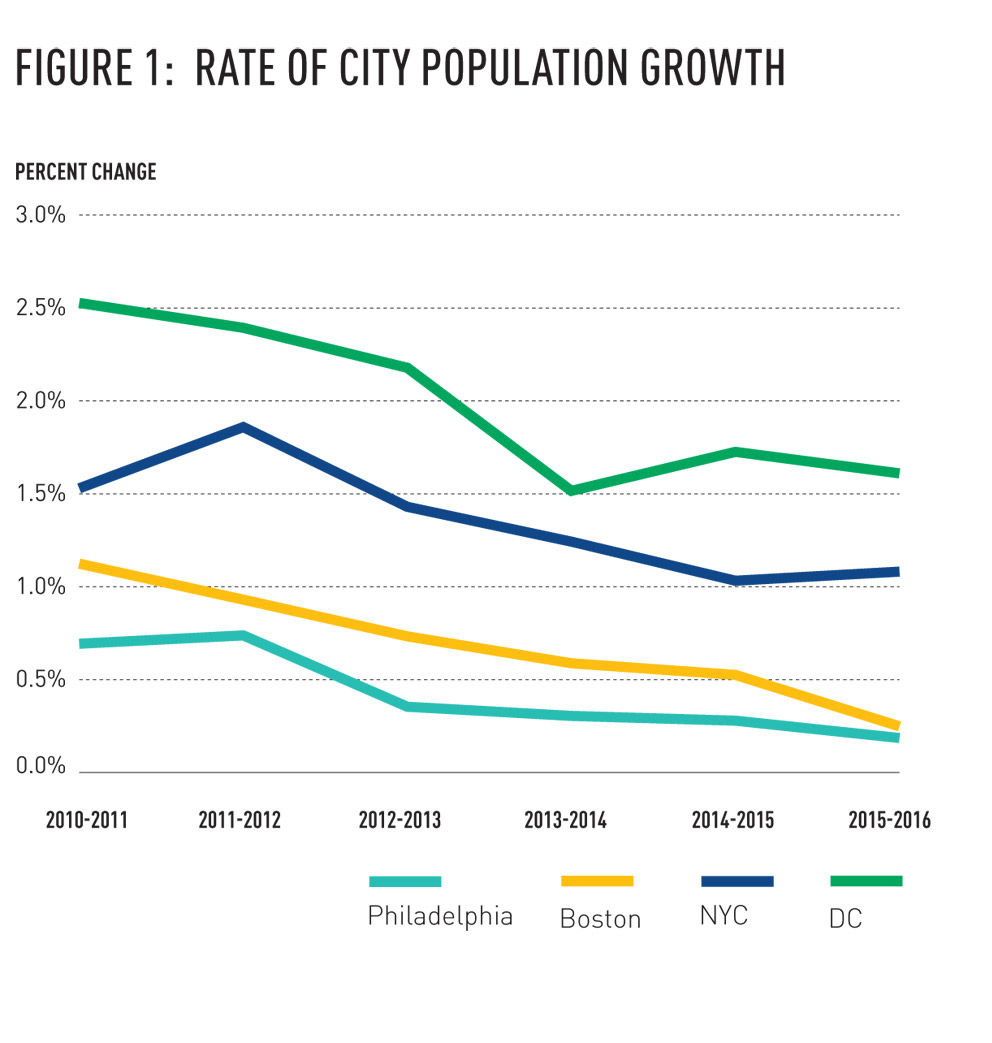 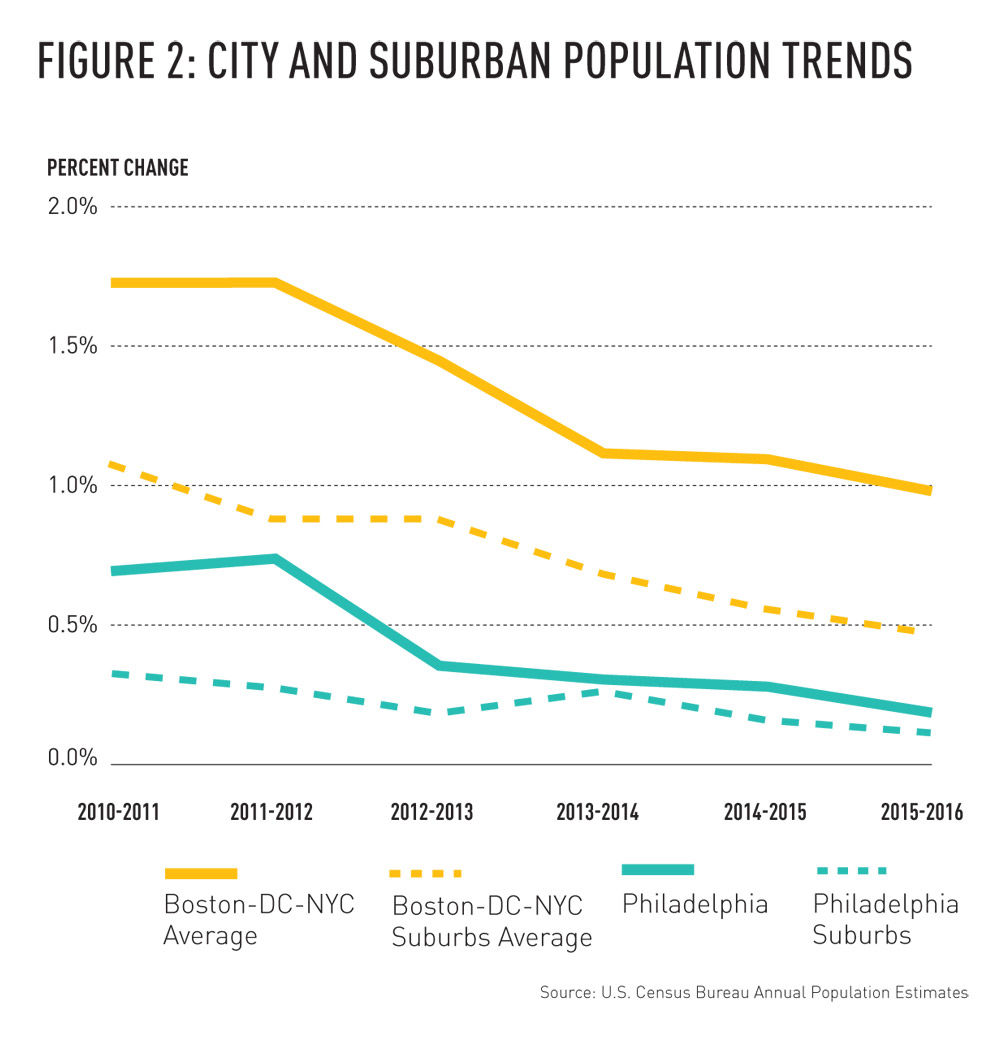 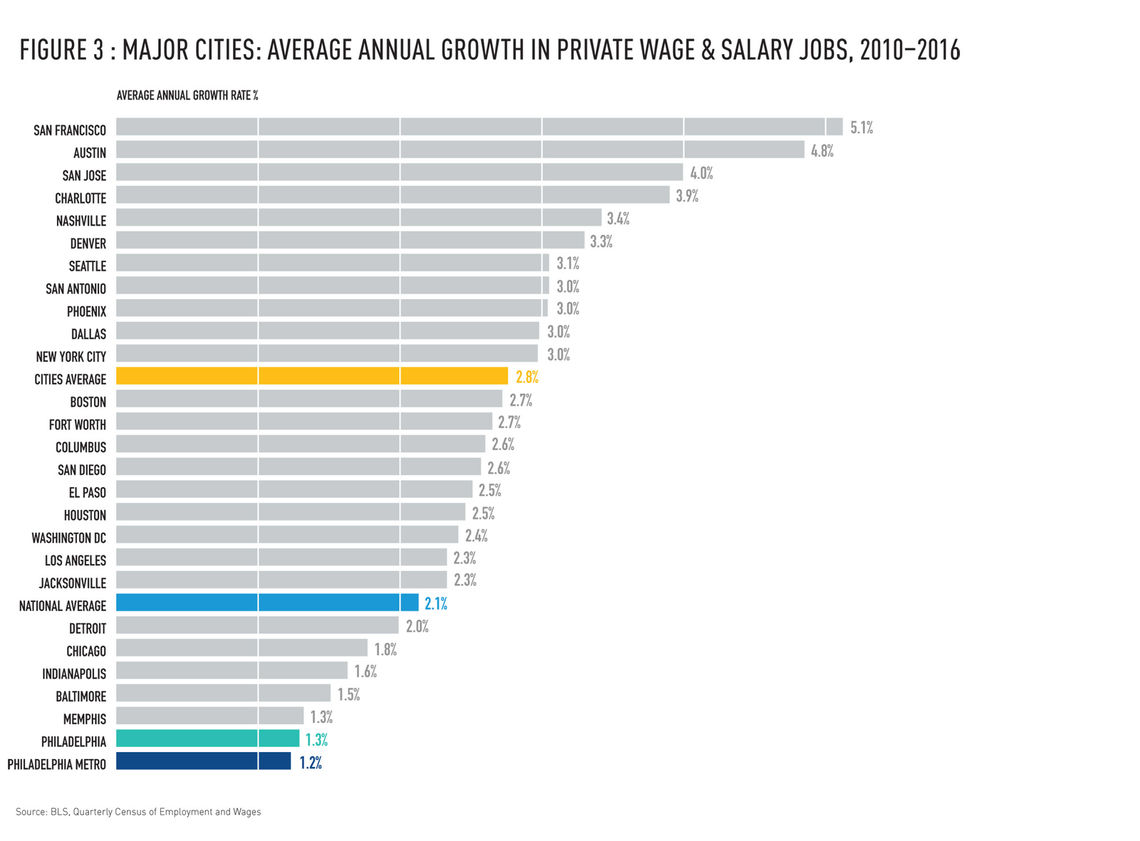 Growth in the Core

The remarkably positive revitalization of Center City and University City is grounds for great optimism. It’s a strong selling point for business, large and small: a highly-diversified, downtown economy; a well-educated workforce; 40% of residents ages 20 to 34; dense, walkable and more affordable than our peers. This appeals to local start-ups and existing firms, to suburban firms deploying clusters of workers in coworking space and to those signing larger, more traditional leases. It’s key to the narrative being crafted for Amazon.

But success in the 10 square miles of Center City and University City is offset by persistent, older trends in much of the other 92% of the city’s geography, a primary reason why we lag our peers and have the highest poverty rate among major cities. These are disparities that consume our politics.

Consider: 37% of those who moved into Philadelphia since 2010 chose the amenity- and job-dense, live-work locales of Center City and University City. But from 2010 to 2016 the city as a whole was still net-negative in the region: 62,000 more residents decamped for the suburbs than moved in, with twice as many migrating to Montgomery County as came our way. Immigration and local births kept us population positive, augmented by millennials and empty nesters flocking to the center.

These last two age cohorts are profoundly beneficial to labor and housing markets, to consumer demand and on-street vitality. But both are time-limited surges, demographic trends that will run their course. So the real work is not the facile, promotional messages celebrating the incoming millennial tide; it’s the lowering of barriers that limit our ability to accelerate and lock-in for the long-term these recent gains; it’s expanding opportunity and revival citywide.

By all means, pursue Amazon with its potential for up to 50,000 new jobs by 2027. But as with millennials, it’s no silver bullet. Resist the temptation to rely only on one-off inducements that cut more holes in the Swiss cheese that is our business tax structure. “Urban economies aren’t really built by winning a contest,” Bruce Katz of Brookings recently wrote, “they are grown methodically by building on a region’s strengths … the race for long-term prosperity isn’t defined by the months-long sprint to lure $5 billion of investment from Amazon; the real game is the marathon” in which cities capitalize on their strategic assets.

Pursue Amazon, but stay focused on across-the-board, more equitable tax reform. Stay focused on quality-of-life issues too. Create a climate where all businesses grow, opportunity expands and the local tax base broadens to fund the quality schools and services this city needs.

An econometric analysis of the impact of the Philadelphia Jobs Growth Coalition plan to reduce wage and business taxes projected 75,000 new jobs in the next 10 years.But who believes these models? So try this: Philadelphia’s economic growth has been the slowest among the top 25 American cities. If we simply got to be average, growing at the mean rate of the 25 largest cities, Philadelphia can add 190,000 more jobs by 2027. That’s real revival.