The Reading Viaduct was built in the 1890s to carry passenger and freight trains into Center City and consists of steel structure, elevated filled areas and arched masonry bridges that all provide spectacular views of the city, even though the last train traveled its rails in 1984 and the viaduct was abandoned to weeds and disrepair. In 1995, SEPTA acquired the quarter-mile-long, 26,000-square-foot spur that curves off northwest from the main branch and runs from Callowhill Street to Noble Street.

In 2010, the Center City District began working in partnership with the community-based Friends of the Rail Park, the City’s Commerce Department, and the Department of Parks & Recreation to evaluate the options for the abandoned viaduct that runs north in two segments: from Vine Street to 13th and Noble streets to the west; and to the 800 block of Fairmount Avenue to the east.

The Center City District was drawn to the project in part because of the success of the High Line Project in New York City in fashioning new green space from derelict tracks and because it could create an opportunity to add residential and light commercial development in the expanding communities of Center City and Chinatown. With generous contributions from the William Penn Foundation and Poor Richard’s Charitable Trust, the Center City District commissioned an environmental and feasibility analysis of the entire viaduct. The study revealed that renovating the viaduct was far less expensive than demolishing it with the added benefit of creating a brand new amenity and green space for the neighborhood.

Construction began on October 31, 2016 and on June 14, 2018, the Rail Park opened to the public with a festive ribbon-cutting 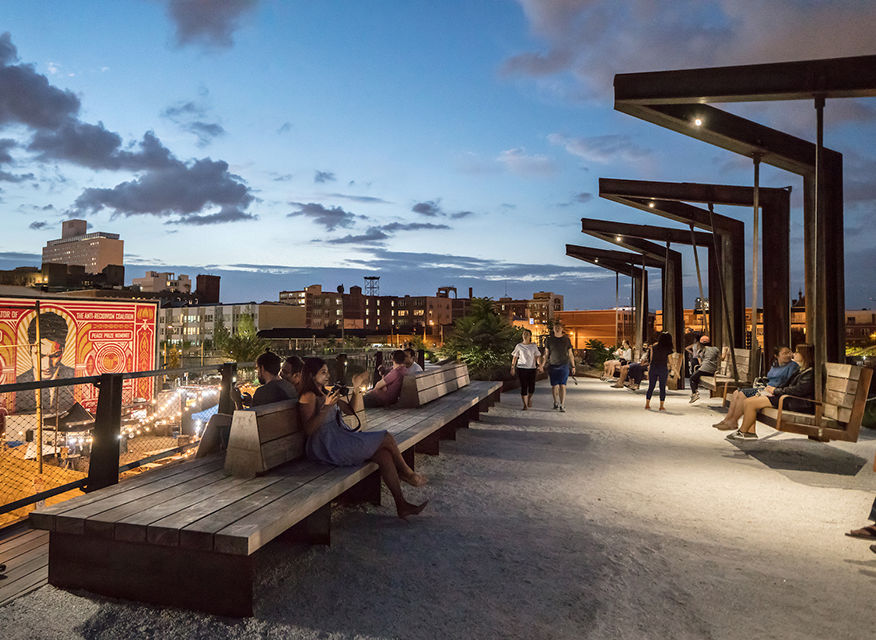 The incredible transformation of the Reading Viaduct would not have been possible without the support of major benefactors such as the Commonwealth of Pennsylvania, PA Dept of Conservation & Natural Resources, Keystone Recreation, Park & Conservation Fund, the City of Philadelphia, A.P. Construction, Forman Family Foundation, John S. and James L. Knight Foundation in Partnership with Reimagining the Civic Commons, Poor Richard’s Charitable Trust, SEPTA and the William Penn Foundation. The Center City District remains grateful to other key contributors to the project including Bank of America, Ari Barkan, Friends of the Rail Park Board of Directors, the Marino Family, the McLean Contributionship, Post Brothers and Timberland.

The Center City District and other stakeholders are currently evaluating the feasibility of and timeline for future phases of the Rail Park.

Thanks to a generous grant from the William Penn Foundation, the Wintergarden was created in 2016 and has since become a wintertime staple in Dilworth Park. In partnership with the Greater Philadelphia Gardens, Wintergarden was first conceived as America’s Garden Capital Maze and Center City District invited Longwood Gardens, Morris Arboretum, the Pennsylvania Horticultural Society and others to create beautiful, green installations celebrating Philadelphia’s unique distinction as America’s Garden Capital. The Center City District and Greater Philadelphia Gardens hosted regular programs throughout the season, including craft demonstrations, winter plant workshops, special happy hours and other activities. 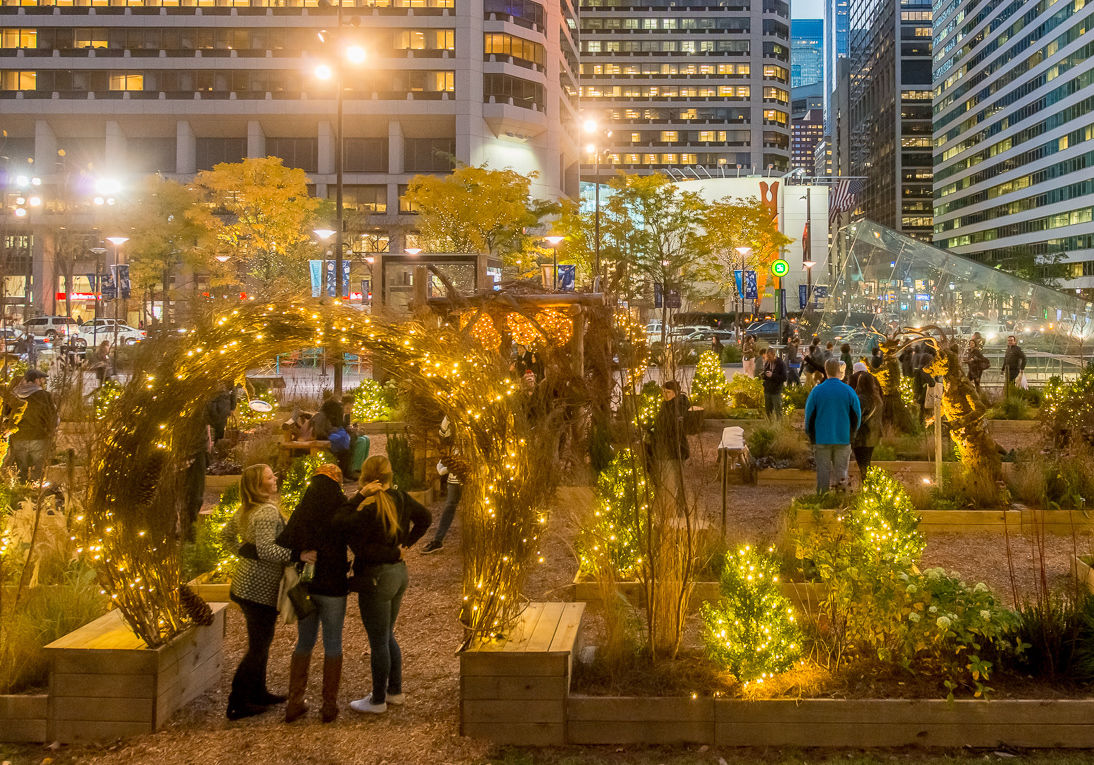 City Hall’s architect, John McArthur, Jr. designed ornate, decorative gates for the north, south, east and west entrances to the building’s central courtyard, they were installed in 2015 through a joint collaboration between the Center City District and the City of Philadelphia.

Vitetta Architects, preservation architects for the restoration of City Hall, developed construction documents from McArthur’s original conceptual drawings, creating gates that are more than 25 feet tall and weighing approximately 3,200 pounds. Robinson Iron Corporation was selected to fabricate the gates in partnership with the structural engineering firm Keast & Hood of Philadelphia.

The monumental gates provide essential, night-time security for City Hall in a manner and style more appropriate for a National Historical Landmark than the generic chain-link fencing that had been in place.

At the midpoint on the Benjamin Franklin Parkway between City Hall and the Philadelphia Museum of Art, Sister Cities Park adds a picturesque swath of green to the heart of Philadelphia’s notable arts and cultural district. From here, panoramic views bring skyscrapers, historic cathedrals and museums into harmony, while the Sister Cities fountain, a unique representation of the world with Philadelphia at its center, is close enough for adults to touch and children to run through.

Opened in 2012 following a $5.2 million renovation by the Center City District, Sister Cities Park, with its interactive fountain, café, Children’s Discovery Garden, and lush lawn, is among the nation’s leading multi-generational parks. The inspiration for the renovation of this park is the Wissahickon Valley, a picturesque wooded gorge extending seven miles along Wissahickon Creek in the northwestern section of Philadelphia.

In 2015, Mayor Michael Nutter announced that Frankfurt am Main, Germany would become the first new ‘sister city’ to Philadelphia in more than 20 years. This unique interactive fountain, prominently aligned between the Basilica of Saints Peter & Paul and the Swann Fountain in Logan Circle,  commemorates Philadelphia’s sister cities.  Each city’s name and its distance from Philadelphia in kilometers are engraved in the granite surface and each has a water spout sized to the population of the city.  The fountain has become a favorite destination for residents and tourists. This beloved park, which was renovated by the CCD in 2012, attracts an average of 28,500 visitors in warmer months.

This addition was made possible by Gina and John Moore, PwC, and Johnson, Kendall & Johnson. 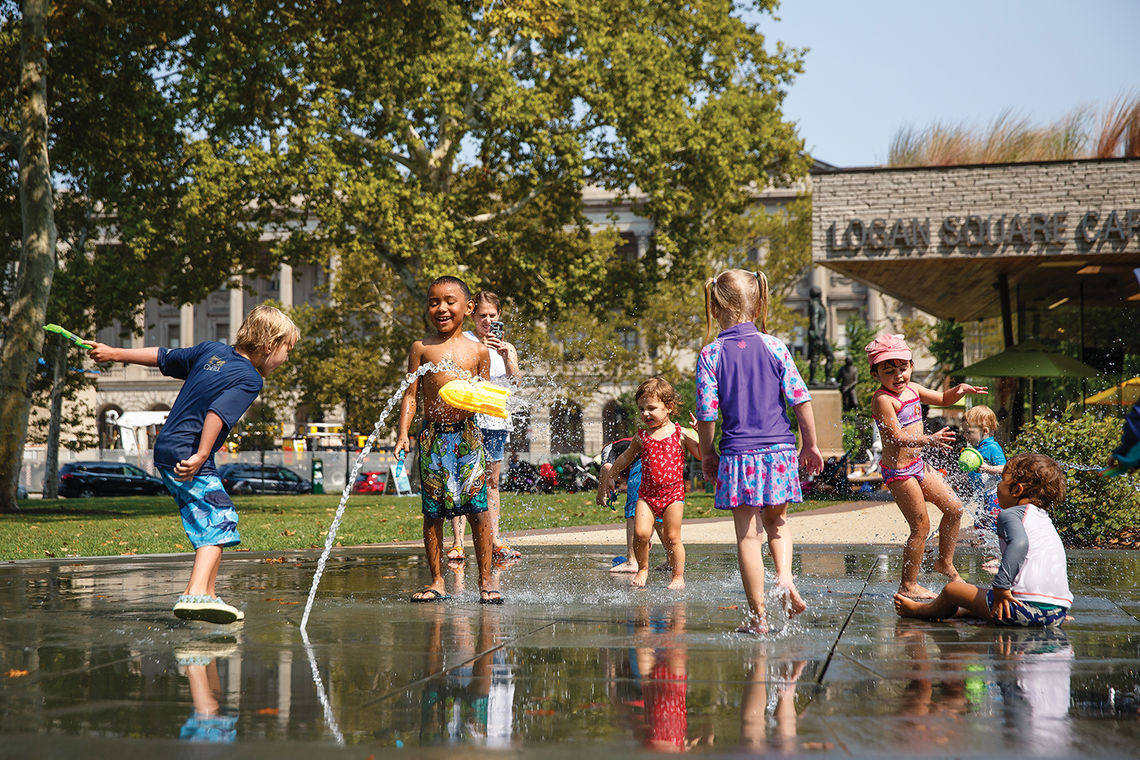